The Highs and Lows of the Alternative Press Expo 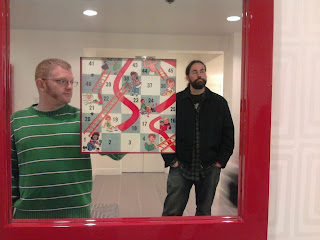 This year, after the first day of the Alternative Press Expo, Brent and I stood in our hotel's swanky lobby to ponder dinner's potential, and I noticed a refurbished Chutes and Ladders game board embedded in a decorative mirror. I snapped a picture of us in it, and the image stands as a poignant reminder of our history with APE -- one rife with reflection, with ups and downs. 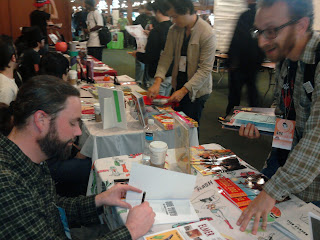 Thankfully, this year we avoided wayward wine barrels; we also enjoyed the rainy coastal weather and the delicious comfort food at Custom Burger. APE covered greater ground at the Concourse with an expanded exhibit hall, and with so many booths, it's easy for one's little comics to get lost in the crowd, but we're grateful for any chance to connect with fellow creators and attract new fans. For instance, behold the picture above and how gleeful this new fan is to have Brent sign a copy of his latest comic, Space Guy!

K.O. Comix would like to thank Robot 6's J.K. Parkin at Comic Book Resources for mentioning Russ's Amazing Arizona Comics, and Al's Comics for including Karaoke Comics in their APE window display. These opportunities only come once a year, so we're grateful for the exposure. If you picked up an issue of our work, please let us know what you think! 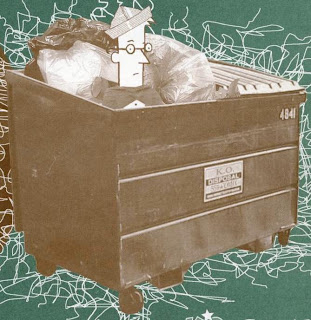 I don't remember where Doug Deever came from.

Perhaps he was inspired by my brother, Kyle, and his penchant for cluttering his bedroom with discarded furniture.

Perhaps he was an idea conjured by Brent's run-in with a homeless man in San Diego during Comic Con, a man that proudly proclaimed, "I'm the Cardboard Guy. I get the cardboard."*

Maybe he's just the exact opposite of The Successors, the comic book Brent and I created to launch K.O. Comix, the creative demands of which drained us only three issues deep. (Actually, three and a half, counting both the unpublished Citizen Angst story and our attempt at a 24-hour challenge The Successors #0. Never start those challenges after a concert -- at midnight!)

Perhaps Doug's a junk heap of all of these concepts -- and more -- which would suit him just fine.

Yes, almost ten years ago now, when Brent and I decided to take K.O. Comix in a different direction than the path set by The Successors, I racked my brain for a completely different story, and like a clogged garbage disposal Doug Deever: Dumpster Diver slowly rose to the surface. I'm still proud of the script, divided into four chapters like Stan Lee's classic Incredible Hulk stories, and told through the perspective of Max Wright, a struggling reporter in the right place at the right time. The captions throughout Doug are snippets of his article, and the headline on the first page, "America's Real Garbage Pail Kids, by Max Wright," inspired many folks in the Small Press section at Comic Con to ask me, "Are you Max Wright?" Okay, maybe the script isn't flawless. I should've realized putting "by" anyone in the first caption would've caused some confusion.

Yet, the truth is, we're all Max Wright, in some way. We've all seen or known someone discarded by society, especially now almost a decade later, during our country's second worst recession, and Doug Deever is merely their ambassador. Literally thrown out with the trash by his own mother (who eventually met a trashy fate of her own), Doug wandered the streets relating to garbage, and when he met fellow homeless folks, he wondered how society could possibly treat people like that finished, empty Starbucks cup, or a hamburger wrapper. Doug rallies his homeless friends and brings his point to an Earth Day festival -- the moment in our story that inspired the pitch we'd use at Comic Cons for years, that Doug is the leader of "a ragtag band of hobo heroes." In the end, he's arrested for his crimes, but what's jail if not just another version of a life discarded? On the streets, or in prison, Doug feels most at home where everyone else would feel completely abandoned. 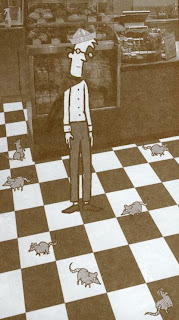 But never mind the story. Doug Deever's life began when Brent decided to adapt my script via digital montage. Fortunately, despite my lack of experience, I was able to help Brent put some of these panels together -- cutting and pasting is practically a part of the universal language now, like laughing, or a growling stomach. We used stock photography, photos we took around town, and pictures of friends to create a grimy world drenched in rejection and redemption. I'm so proud of the result, I'm still making Doug Deever shirts! (Only $5 while supplies last, folks!) One year at Comic Con, artist Seth Fischer told us he really dug the look, a comment we've cherished especially since his untimely passing.

Indeed, I'm happy to say I still haven't seen anything that looks quite like Doug Deever, Dumpster Diver. Selfishly, I hope it stays that way for a while, because Brent's work still deserves the spotlight, and I hope people enjoy my story through it. Only a few issues remain in my collection, and if anyone is interested in reading it, drop me a line. True, I don't remember where Doug Deever began, but it's the kind of story that continues all around us . . . that will never end until we really understand how it all started. What better day to make that vow than Earth Day?

*Incidentally, the Cardboard Guy is in the image above, second from the left. Wide-eyed, ready to get the cardboard.
Posted by KaraokeFanboy at 6:17 PM No comments:

Have Yourself a Merry Little Christmas

Little Christmas (noun): (1.) The day on which Christmas was celebrated under the Roman calendar, before the adoption of the Gregorian calendar; otherwise known as "the Epiphany," celebrated as the day the three wise men visited the baby Jesus; January 6. (2.) A comic book self-published by K.O. Comix, written by Russ Kazmierczak, Jr., illustrated by Brent Otey, adapting mythology about St. Nicholas to explore what Santa Claus might do the rest of the year.

In a sentence: Precious few copies of the comic book Little Christmas remain in Russ's K.O. stash, so if anybody wants one, they'd better e-mail him fast!
Posted by KaraokeFanboy at 8:15 AM No comments: 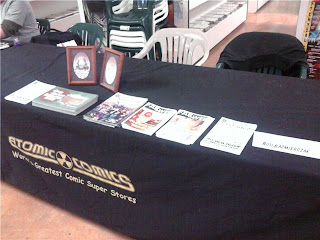 The folks at Atomic Comics in Mesa, Arizona were kind enough to include K.O. Comix in their Indy Comics Week celebration yesterday. Here's my humble display, and our books on the new release rack. My thanks to Alex, Nick, and the rest of the Atomic crew! 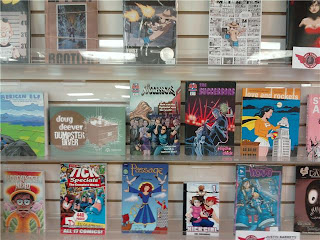 Posted by KaraokeFanboy at 12:45 PM No comments: 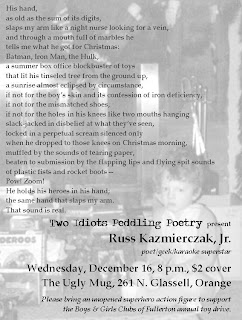 I will be the feature at the Ugly Mug's Two Idiots Peddling Poetry this week, and the guys (who are far from idiots in real life) have agreed to let my reading double as an action figure toy drive for the Boys & Girls Clubs of Fullerton. So, if you're in Orange County, California, be a hero on Wednesday night . . . by bringing one! I'll have some good ol' K.O. Comix for sale, too. Here's a flyer with a sample of what to expect.
Posted by KaraokeFanboy at 12:31 AM No comments: 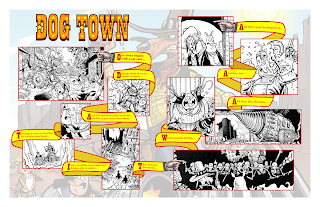 Need to know more about what Dog Town is all about? Try this...
Posted by Brent at 11:37 PM No comments:

If superheroes were real, supervillains would be, too. Would it be worth it?

A psycho chick gets superpowers. Jocks, be afraid. Be very afraid.

A ragtag band of hobo heroes takes on Earth Day . . . and your heart.

What does Santa do for the OTHER 364 days in the year?

He made a living drawing comics. Now he's living IN a comic book. What's the difference?